How to apply Hitchcock's rules to your Visual Thinking

Learning things from other visual arts is always essential to enrich our visual thinking. So that's why today we will learn from movies, specifically from a tremendous director, Alfred Hitchcock.

Hitchcock pioneered visual rules in cinema, which I will show you today.

There are some specific techniques he invented that we can apply to our visual thinking to make our messages more visually compelling.

RELY ON VISUALS, NOT TEXT

Very few people know that Hitchcock, in his beginnings, made some silent films.  Because, in that period, there was no voice track, these films showed dialogue with printed words on the screen that interrupted the sequence flow.

That's where Hitchcock learned to tell the stories with the camera to minimize the number of titles that would interrupt the scene.

He used to say this

We should resort to dialogue only when it's impossible to do otherwise.

How do you apply that to your visual thinking?

Add text to your sketchnotes only when it's necessary.

Avoid overwhelming information for your audience.

If someone is talking about creativity, people expect you to draw a lightbulb but go for something else.

Because every time you draw a cliché, you are setting areas of your map that people will ignore.

Hitchcock talked about the "counterpoint concept" in one of his interviews.

I've always believed that the voice should never make the same statement that the face is making. If a girl says "I'm happy" and she's got a happy expression you're saying the same thing twice, once with sound and once with a visual. Should be counterpointed. A girl can be crying and in the argument, she can say "don't make me laugh"

You don't necessarily need to put obvious keywords that describe what you are already depicting through an image.

Disrupt. A great way to do this is to think in terms of opposites.

If your write "protect," you draw "attack."

Play with this, and you will see that even if image vs. text are contrarian, the images will have sense through this disruption.

Once, a reporter asked Alfred Hitchcock if he ever improvised on the set, and he answered something very interesting:

No. Any improvisations are made in the office while the film is being put on paper. I mean to improvise on the set with all those electricians and carpenters around I personally don't see how it's done.

We cannot apply this rule in all visual thinking fields.

Of course, you can improvise by taking personal notes on your sketchnotes. You need to improvise while doing graphic facilitation or coaching, but what Hitchcock said about improvisation could apply to graphic recording.

Most of the maps you see around fail on the lack of planning. Improvise while planning.

Ask the speaker you are going to map, his presentation in advance.

Most presentations and speeches have scripts.

Ask to have access to them. And do the improvisation while planning the ideas and metaphors you will draw the day of the graphic recording.

If you improvise while doing the graphic recording on the event's day, you will end up collecting an insane amount of icons in a haphazard fashion.

Even if Alfred Hitchcock was a movie director, he didn't like the part about directing actors too much.

He was obsessed with directing the audience rather than the actors. And this is something visual thinkers usually need to remember to do.

People hardly read 100 % of a map, and if you don't play with elements to drive the audience to those parts where you need them to read, your main messages will get lost.

So how do you guide your audience toward the information you want them to read?

Use key metaphors as lighthouses.

Those are the images where the audience will direct their eyes.

A way to make people read is to put key text near those images.

In Hitchcock's movies, the size of the image on the frame was proportional to its importance to the story.

He used to zoom in to clarify that an element was crucial for the plot.

How do you transfer that to your visual thinking? Play with sizes.

Larger images inside your map will attract your audience's attention.

Apply size according to importance.

This will help you convey the critical information through visuals rather than text.

Two things about how Hitchcock managed color. The first is this one:

Don't use color until you need it.

This is a good reminder because black-and-white visual notes are not wrong.

They are not incomplete as many visual thinkers wrongly think.

If you don't need color, just don't use it and take advantage of the high-contrast images black and white gives you.

One of the most famous Hitchcock movies, Vertigo, symbolically uses the color green. There is a connection between the color with the main character. Then the color is transferred to another of the characters. It is as if the color were one more element of the story.

If you pay attention, when there was green, there was also red because he was playing with complementary colors.

Remember that we use complementary colors to create visual interest and direct contrast between the two.

Complementary colors It's a natural example of opposites attracting.

If you use color in your visual thinking, don't use it just as a decorative graphic element.

Try to use and apply color symbolisms or to highlight things you want to pop up on your sketchnote or visual map.

Always remember that color is a message in itself.

In Alfred Hitchcock's movies, the visuals primarily tell the narrative.

That's why they say you can watch his films with the sound turned off and still understand the story.

Let me ask you a provocative question:

Can people understand your visual maps without reading the text?

Try to incorporate some of Hitchcock's techniques to boost the way you communicate through your visuals. 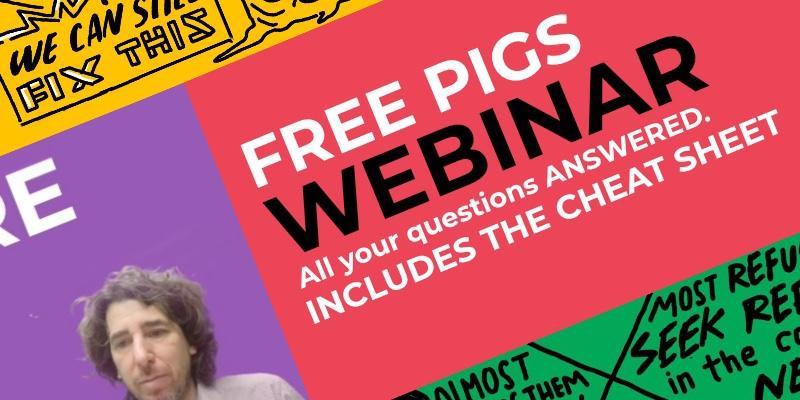